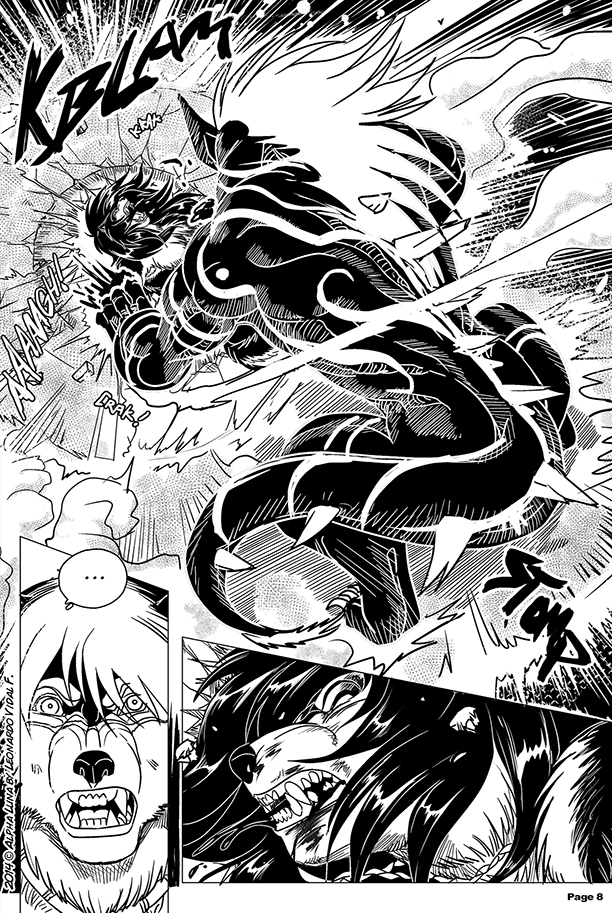 Well, that didn’t turn out well for Luna. And you know what takes a lot of time? Drawing fight scenes that look good, and I’m trying!

I know that crater looks a bit of a stretch, but also the idea of a Giant Four-Leged giant Demon Cat fighting 2 werewolves :p In truth there is some kinetic energy being released, an aura if you will beside the brute impact and you’ll see more of that as the fights goes on.

UPDATE:
In other news… The Cameo CONTEST ended!
Because I needed a couple for the scene I divided the raffle in 2 parts. In the end here are the winners: Jorge Luis Rodriguez & Jorge Tah Trickster

You can watch the video to see the process, but it’s only spanish spoken. In text form I explain at the beginning of the video the reason why some people were not added to the board was because many didn’t put additional info why you wanted to become an extra. Some people did a backgroung story for their characters, while that was nice there was no personal input to “why” you wanted to be included. And some of those stories suggested -wrongly- that you’d like to be part of the gang with Luna, which was going against the basic idea of choosing someone who is just an background extra. Also, some people tried to add were-creatures, werewolves to the mix when I specifically said (under Step 3) to avoid doing that. And some just said they wanted to be in just…because they liked the comic…and thats it.
So, in the end those nominated to be added to the roulette were those who did not make those mistakes described in the first place and explained why they wanted to be in. Creating a backstory was nice but not really needed. More important was to make your message clear.

I really appreciate everybody who posted and participated! And don’t be so upset, there is a high chance there will be a new spot in the future for another cameo so be alert! Take care!